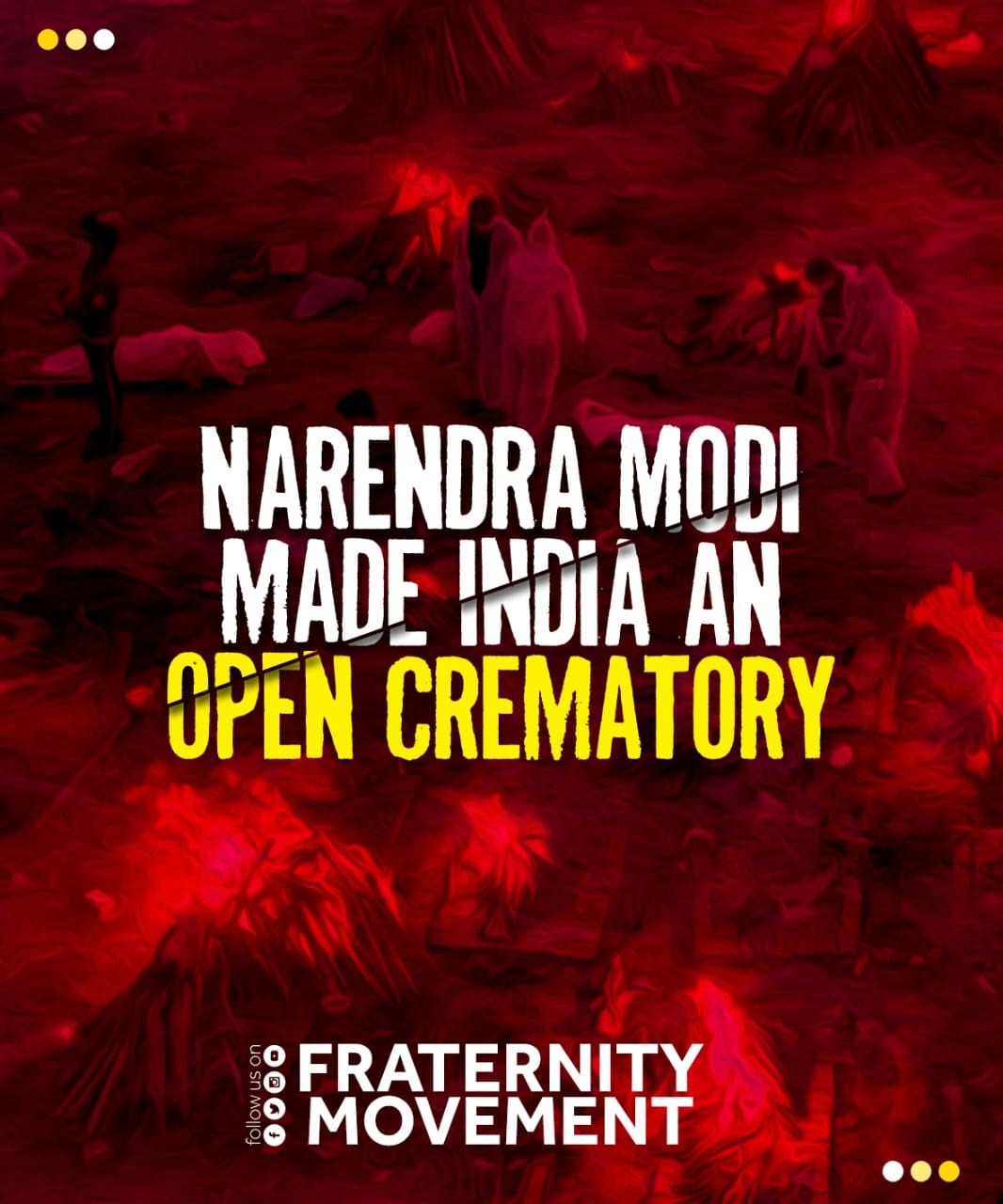 The country has been under unfortunate circumstances with the second wave of the pandemic. For the past three weeks, when every day, a new record is marked regarding COVID cases.An apocalyptic healthcare situation is unwinding as we watch our loved ones fall sick and die by the minutes, gasping for breath, waiting for medicines, Oxygen and hospital beds. The pandemic has exposed the naked horrors of living under a fascist regime whose lust for power has made it blind to the heart-wrenching situation.For those responsible to have prepared the country for this deadly second wave of the pandemic, our dear lost ones turn to mere numbers and statistics, which the government is trying hard to push under the carpet. The number of deaths due to covid is highly under reported. It is fair enough to say that the second wave is a manmade disaster. The country could have been prepared for a better medical response but the Modi regime kept a blind eye and played down the possibilities of a new strain of the virus when it was first being suspected in Maharashtra.Narendra Modi transformed India into an “open crematory”. With shortage of all necessary healthcare, from hospital beds to oxygen, India is caught deliberately off-guard. The healthcare infrastructure is over-burdened and Prime Minister Modi continues to look the other side. The system has not been able to provide for the basic medical facilities like hospital beds, oxygen, injections. The system could not even provide a dignified death to the victims of Covid. The healthcare system is running on twitter and other social media platforms as youths and activists step up to save India from the horrors of the ferocious second wave, who are now being criminalised for asking for help or amplifying the medical requirement of someone else.It is not an exaggeration to say that it has been criminal on part of the Prime Minister to hold Political rallies and roadshows and to allow Kumbh Mela while being aware of the increased infectivity of the double-mutant new strain. The BJP’s lust for power and hell-bent Hindu appeasement has cost India thousands of lives as people have been left to die on streets, in ambulances and hospital corridors. As Indian Medical Associations Vice President right put it, Prime Minister Narendra Modi is the ‘super spreader’ of COVID 19.At this moment we find ourselves in grief and loss, we must not forget, this is nothing short of an endless series of institutional cold-blooded murder, rather murders, and the blame is solely on the “Pradhan Sevak” for looking away when he should have strengthened the medical system.BJP and Prime Minister Narendra Modi rose to power in 2014 championing the idea of ‘good governance’ and complaining about the poor governance of the previous governments. However, it would not be an exaggeration to say that no government even elected to power in India has been so insensitive, incompetent, incapable and unqualified to govern this country. Fraternity Movement demands the nothing but the resignation of Prime Minister Narendra Modi. We urge all citizens to hold him accountable for each and every person the Covid has consumed.#ModiMustResign– Fraternity Movement