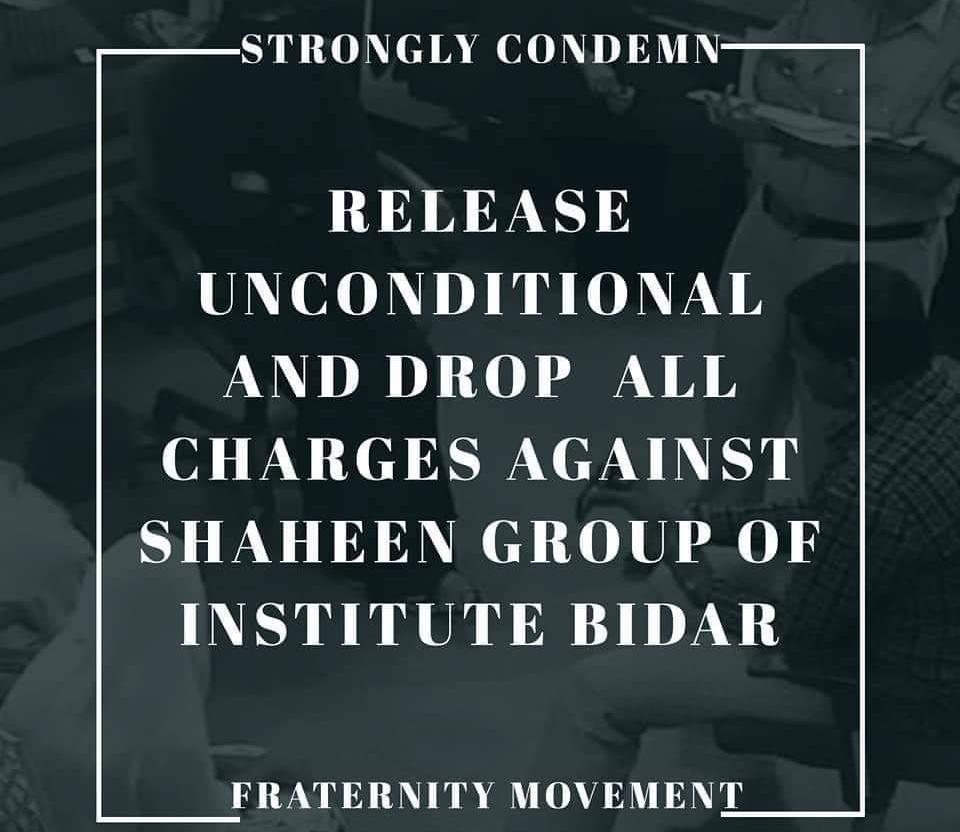 Fraternity Movement strongly condemns the illegal, unreasonable and unjustifiable action of the New Town Police, Bidar against Shaheen Educational Institution, Bidar, Karnataka. Following the complaint filed by a social worker Neelesh Rakshaal against the Shaheen Educational Institution and local journalist Yousuf Raheemat New Town Police Station, Bidar, the Bidar police registered the complaint as Crime No. 10/2020n for offence U/s. 504, 505(2), 124A, 153A and 34 of IPC without proper inquiry into the matter. Shaheen Educational Institution is being targeted for presenting a strong criticism of the unconstitutional, anti-Muslim, anti-minority law of CAA, NRC, NPR in a drama conducted by the students alleging that this is an act of sedition. This kind of attitude of the police will create communal disharmony among students, teachers and parents. The alleged drama conveyed a strong message against spreading fear through the unconstitutional Citizenship Law threatening the existence of millions of people in India. The New Town Police, Bidar is terrorising the school going kids and their parents to stop them from protesting. The Police on 27.01.2020 seized the control room of the school and scanned all CCTV footage and parked their official vehicles in the school premises which created fear and panic among students. On 28.01.2020 three police officers in uniform, one officer in civil dress and one of them carrying a gun interrogated minor students of Shaheen Educational Institution for forty-six minutes in a very intimidating and fearful environment without informing their parents. On 30.01.2020 the Police visited the school again for interrogating minor students and forcing the management to send the minor students to the office of the Deputy Superintendent of Police. The constant interference by the police has disturbed the day to day functioning of the School.

Karnataka State Commission for Protection of Child Rights must take immediate action against this blatant violation of child rights and must send notice to the Bidar Police to adhere to the rules of the Juvenile Justice (Care and Protection of Children) Act 2015 and conduct the proceedings of the case in a child-friendly manner. The photos that are going viral on social media clearly shows that the police have violated the provisions of Juvenile Justice (Care and Protection of Children) Act 2015, Section 107 which clearly states that only a designated Child Welfare Police Officer (CWPO) can exclusively deal with cases relating to children. Also, Rule 8(2)(v) Model Rules provides that the parents of the child may be present during the interrogation. The police have violated this rule blatantly as the minors were interrogated in the absence of their parents in a terrifying manner. Karnataka state must take immediate action to protect child rights, Shaheen Educational Institution and other similar institutions working at grass root levels of the state to spread education for the downtrodden and marginalised communities. We believe that Shaheen Educational Institution is being targeted because it is a minority educational institution contributing substantially in raising the educational awareness among minority communities, especially in backward regions of Karnataka. Shaheen Educational Institution is being targeted to create fear and panic among the minority communities and institutions in India to supress dissenting voices. In times when “Shaheen Bagh” has become synonymous to the struggle for saving the constitution and minority institutions like Shaheen Institution, Jamia Millia Islamia and Aligarh Muslim University have become the real victims of state-sponsored terrorism in India.FRATERNITY MOVEMENT