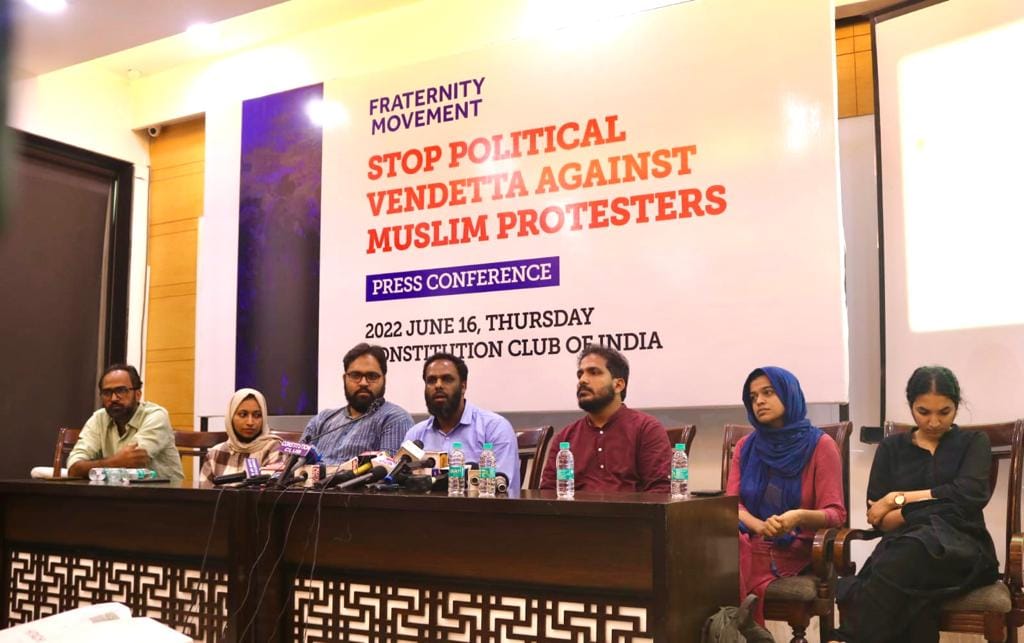 Fraternity Movement of India urges everyone to acknowledge the plummeting law and order situation in this country under the BJP government which has led to unprecedented hostility against the Muslim community. Unfortunately we see that Indian law enforcement forces have become the greatest threat to Muslims in India, with all institutions categorically failing to safeguard the rights of the largest minority, or even any ‘undesirable’ person, groups or communities for the ruling party in the country.

After Narendra Modi-led Bharatiya Janata Party’s second term in 2019, incidents of hate speech have increased at an alarming rate. In this year alone dozens of Dharm Sansads (religious congregations) have been organised by extremist Hindu outfits openly calling for ethnic cleansing, mass murders, and genocide of more than 200 million Muslim citizens of India. The speakers in these genocidal calls have been enjoying an unparalleled amount of impunity from the state at a time when hundreds of scholars, activists and human rights’ defenders languish behind bars for speaking up against government policies.

As a result of this unprecedented flow of hate speeches and deeply derogatory rhetoric against Muslims, India’s political vocabulary has taken a dangerous shift. Elected officials and members of the ruling BJP no less than Chief Ministers have normalised demonising the Muslims in their speeches. Much of these hateful rhetorics against the Muslim community are said in television news debates.

In one such debate, BJP’s national spokesperson and leader Nupur Sharma made derogatory remarks about the Prophet Muhammad. Muslim activists, community leaders and other organizations demanded criminal proceedings against Sharma and Naveed Jindal, another BJP functionary who repeated Sharma’s statements on his social media. In the next few days, governments of Arab nations heavily criticised the comments and called upon the Indian government to take action against the accused. These kind of remarks had become a norm in India and it became a major foreign policy issue for the government. With India facing immense pressure from the Arab world, the ruling BJP government was forced to issue clarifications and had to eventually suspend Sharma and Jindal from the party’s primary membership.

In the days followed Muslims staged protests in different parts of the country demanding the arrests of the two BJP leaders. However, these peaceful protests were met with an unprecedented police crackdown. The ruling party decided to take vengeance on the Muslims for its humiliation abroad. Two Muslim teenagers were killed, hundreds were illegally detained and several dozens of Muslim-owned houses were demolished. Several chilling videos of police officials brutally assaulting Muslim protestors were documented and reported by media organisations. Thousands of Muslim youths were arrested under serious, non-bailable charges while Nupur Sharma and Naveen Jindal were offered security by the state.

One such crackdown happened in Uttar Pradesh’s Prayagraj where police have booked among others, the federal working committee member of Welfare party of India Mr Javed Muhammad. Javed’s daughter and Fraternity Movement national secretary Afreen Fatima who in a letter written to the National Commission for Women (NCW) alleged that her father was been illegally detained by the police.

Several hours later, in the middle of the night, Afreen’s mother and younger sister were also detained. The police forced the remaining residents of the house to evict the property and threatened demolition at dawn. On Sunday morning the house was illegally demolished. Javed Muhammad, her father, was named as the mastermind of the clashes and sent to jail.

We stand with Afreen Fatima and her family who are enduring a difficult phase. We see the arrest of Javed Mohammed as part of a new trend of silencing Muslim leaders to create dispair to the people of that community. We demand an impartial judicial enquiry into the demolition of Javed Mohammed’s house among other houses razed down as a collective punishment, as gloated by government officials and ruling party leaders.

Sarah Ahmed Siddiqui, president of Fraternity Movement Allahabad is also targeted and vilified by right-wing news channels. Reports suggest that she is named as a conspirator of the protest on 10 June in Allahabad. We condemn the media trial and extend unconditional solidarity to Sarah and her family.

We urge people, the core of the country’s democracy, to hold officials accountable for their anti-Muslim atrocities.