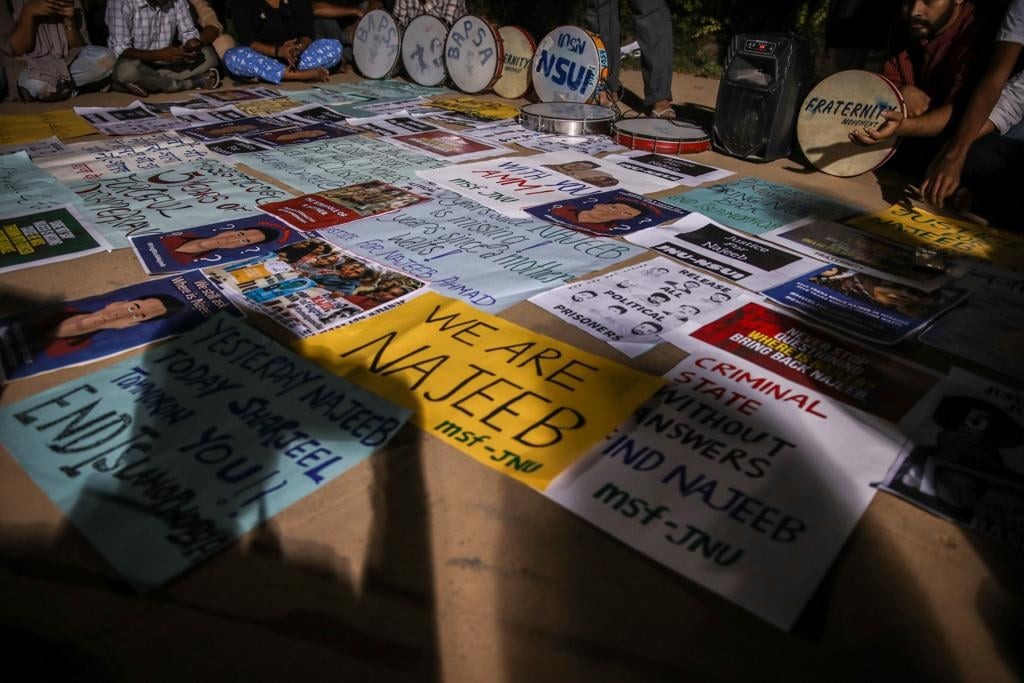 15th of October, is the day JNU saw the forced disappearance of one of its students, Najeeb Ahmad from within its campus premises. A first year MSc. Biotechnology student at the time of his forced disappearance, Najeeb was brutally assaulted by a right-wing mob (ABVP) in the university hostel the night prior to his disappearance. Even after 5 years, the question remains, “Where is Najeeb?” To this we must add one more, “Who is responsible for his forced disappearance?” and “What happens to the culprits?”

The CBI in May 2018 said it found no evidence to show that a crime had been committed against Najeeb. Failure to find Najeeb is not just caused by the state, it could not have happened without the cooperation of the JNU administration and the left-led JNUSU. From the very first day, the left-led JNUSU has not just proved its negligence in the issue, but also has proved itself to be an active collaborator in the disappearance and the criminalisation of Najeeb Ahmed. The then-President of the Union from AISA, Mohit Pandey, and another AISA student, had signed a letter (which is available in public domain) to the Warden at Najeeb’s hostel that established that Najeeb was a criminal and another where they declared him as mentally ill (which supposedly had a link to his ‘disappearance’), and thus started the narrative which later the JNU administration, the Delhi Police and CBI also picked up, which refused to recognise that any crime had taken place against Najeeb Ahmed.

The Role of JNU in Najeeb’s Continued Disappearance:
Since the first day, when Najeeb was at the receiving end of violence, all involved parties who could have otherwise protected him and prevented his enforced disappearance – including his roommate, hostel authorities, JNU Administration and media houses – projected him as a culprit. Those perpetrating the actual physical violence solidified and spread the narrative that Najeeb was the first one to initiate violence, thus justifying their counter-attack and rendering Najeeb as suspect. In the long tradition of established stereotypes of Muslims as intolerant, prone to violence and inherently a threat to co-existence, the widely seen and witnessed violence on Najeeb was obscured and justified by this completely false and constructed narrative that Najeeb attacked innocent residents of the hostel who had merely come to his room, without provocation. It was further tinged in the narrative that Najeeb was ‘provoked’ by the mere sight of a red thread on someone’s hand – a suggestion so improbable that it bounds on the impossible – but the narrative was spread unchecked and did the damage it was meant to. Alongside, his roommate wrote a letter – which he later denied on flimsy grounds – arguing that he felt threatened by Najeeb’s behaviour towards him. All of these further worked to render Najeeb utterly vulnerable and alone in the hostel, apart from being physically assaulted, being the subject of anti-Muslims slurs and facing expulsion from the hostel.

Then Mahi-Mandavi hostel administration and JNUSU leadership identified Najeeb Ahmed as guilty instead of the students who attacked him and were part of the requisition to keep Najeeb Ahmed out of bounds from his hostel. The then-JNUSU leadership not only branded him as guilty, but also, they hid the issue from general student community of this university for the crucial period of the first forty hours.

From taunting Muslim activists with statements like ‘Islamophobia is a jargon’ to refusing to recognise that Najeeb faced violence because he was a Muslim, the JNUSU too displayed unabashed Islamophobia. For over a year, there was not a single note on this by the JNUTA, JNU’s carrier of left-liberal values. Even after a year, there was no attempt by the JNU Students’ Union to hold any protest or solidarity meeting; at the time to the majority of the campus, there was never a Najeeb.

Despite relentless pressure, the CBI and the Delhi Police made no headway in the case. These are the same agencies that are capable of and have had a long history of framing innocent Muslim youth, by carrying out intense surveillance, seizing and hacking their personal devices and creating far-fetched theories based on such acts. Since the initial days of Najeeb’s disappearance, these agencies tried to connect Najeeb with ‘terror’ outfits. Initially, they said Najeeb might have gone to Jamia by his own, then they tried to come out with a fabricated story of seeing him in Darbhanga and finally, they tried to prove that he joined ISIS by releasing some fake media news stories which Delhi High Court rejected as false. As we have asserted time and again, these names and choice of places is not an innocent one – this is Islamophobic dog-whistle politics which has a long history when it comes to the framing of Muslims in this country. In order to cover up their political bias, allegiances, and lack of interest in carrying out a just and free investigation, they instead fostered these counter narratives, creating doubt over Najeeb’s innocence and his experience of violence. Places like Jamia and Darbhanga have been rendered vulnerable by their construction as deadly hubs of ‘terror’ in the public imagination and collective conscience of the country for many decades now, and making unsubstantiated claims of tracing Najeeb to these spaces not only revealed their intentions but derailed the investigation significantly. The investigation by India’s premier investigative agencies proves that these agencies cannot conduct a competent investigation due to their anti-Muslim bias.

The lapses of the CBI are many:
Failure to conduct custodial interrogation of Najeeb’s assaulters (even though a Proctorial inquiry found them guilty of causing violence to Najeeb), failure to collect complete forensic data from the cell-phones of these attackers (three phones were left untapped as they were pattern-locked!). The Delhi High Court too allowed the CBI to get away with dereliction of duty. Let us not delude ourselves. It is not just the inability of investigative agencies, JNU administration and the JNUSU that characterizes the behaviour of Islamophobic and Brahminical forces towards the marginalized and the oppressed; it is their unwillingness to mete out civility and dignified behaviour and it is their very willingness to repeatedly jeopardize and harm the lives of the marginalized that characterizes the spirit and condition of the everyday functioning of Islamophobia. This logic informs the failure of the investigative agencies in tracing the whereabouts of a Muslim student and the JNU administration’s callous attitude with regard to the disappearance of one of its own students, a student which it perhaps did not consider as one among their own in the first place. We are not here to simply mark this day; we are certainly not here to accept the false narratives of ‘vanishing into thin air’ and ‘missing without trace’.

For Najeeb, and the rest of the Muslims, on campus and outside, justice has been persistently denied. Muslims students since then have fought against injustice, one of the primary battles of which has been the fight for the recognition and registration of the fact that targeted violence against them has taken place; that it is not isolated incidents, or equally placed fights, but a full blown Islamophobic system that is against them. Despite the academic splendour and excellence accorded to JNU, it has taken the blood, sweat and tears of Muslims fight to fight for their dignity and survival.

The systems of power works against oppressed caste, tribes, religious groups in myriad of ways – students belonging to these groups do not have to be politically vocal to be recipients of violence, their mere presence in the university spaces threatens Brahminical and Islamophobic ego, and thus is vulnerable to violence. Yet, amidst our many vulnerabilities, unity of the oppressed, across caste, tribe and religious groups, strikes at the heart of Brahminical supremacist systems of power and sends tremors in its wake. Fathima Nafees’ call for justice will continue to be taken forward. Even in the face of stubborn injustice and apathy, it is our duty to resist. To continue to protest and demand answers from those who fear our questions about Najeeb. We owe this to Najeeb, as his fellow students from JNU. We owe this to Fathima Nafees (Najeeb’s mother) and his family in their search for Najeeb.